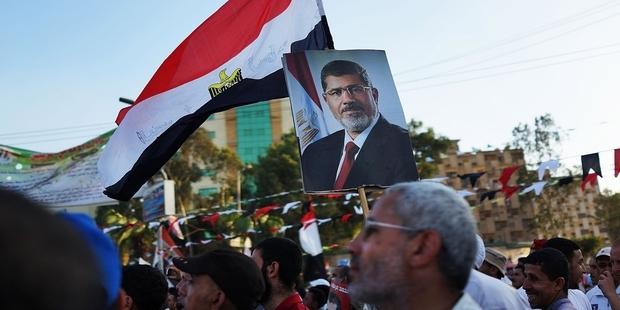 Hundreds of pro-Morsi supporters have been arrested since he was ousted from power.(C) Spencer Platt/Getty Images

Hundreds of pro-Morsi supporters arrested by the Egyptian authorities have been denied their legal rights, said Amnesty International in a new briefing published today. The organization has gathered testimonies from detainees who said that they were beaten upon arrest, subjected to electric shocks or hit with rifle butts.

The Egyptian authorities must respect the right to due process for those who have been rounded up and are facing accusations of inciting or participating in violence in the last two weeks. Allegations of ill-treatment must be investigated urgently.

Since the news of  President Mohamed Morsi's ousting on 3 July, lawyers have told Amnesty International that more than 660 men have been arrested in Cairo alone, including prominent leaders of the Muslim Brotherhood and its political wing, the Freedom and Justice Party (FJP). Many were arrested on 8 July during the violence around the Republican Guard Club, which left at least 51 Morsi supporters dead.

While release orders were eventually issued for some 650 suspects, lawyers have told the organization that an unknown number remain in detention due to their inability to pay bail ranging from 1,000 to 5,000 Egyptian pounds (US$140-US$700). The whereabouts of the deposed President and his team of aides are still unknown.

Amnesty International fears that their conditions of detention may amount to an enforced disappearance. Family members who have asked have been denied information on their relative’s whereabouts and fate, and they appear not to have been brought before a judge or given access to a lawyer.

Under international law, all detained suspects must be released or promptly charged with a recognizable criminal offence. Anyone deprived of their liberty should also have the right to challenge the lawfulness of their detention before a judge, as well as access to lawyers and their families, and receive any medical treatment that they might require. Lawyers must be permitted to assist their clients unimpeded.

Amnesty International urges the Egyptian authorities to launch full investigations into reports of detainees being beaten and ill-treated, particularly upon arrest, in the vicinity of the Republican Guard Club. This including being hit with rifle butts and given electric shocks. They also said that at police stations they were interrogated while blindfolded by men they believed to be intelligence officials from the National Security Agency, a practice that is eerily reminiscent of Mubarak-era tactics. Newly released detainees also complained about not being allowed to call their families or lawyers.

Directly after the army announced the ousting on 3 July, at least six pro-Morsi television stations were taken off the air and then had their studios raided. The following day the FJP announced that the state's printing press refused to print the party's newspaper. On Sunday the Public Prosecution froze the assets of 14 men associated with the Muslim Brotherhood and parties supporting them.