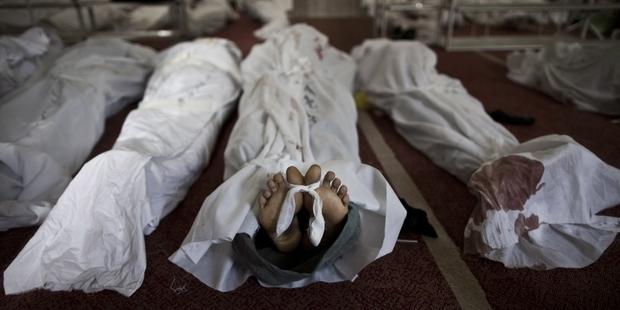 More than 600 people have been killed in unprecedented levels of violence by the security forces. © MAHMOUD KHALED/AFP/Getty Images

There must be a full and impartial investigation into the violent dispersal of sit-in protests in Cairo this week, where security forces used unwarranted lethal force and broke promises to allow the wounded to exit safely, Amnesty International said today on the basis of its research on the ground.

Unprecedented levels of violence have left more than 600 dead around Egypt. The Ministry of Interior reported 43 fatal casualties among security forces. The death toll is expected to climb further as bodies are transferred to official hospitals and morgues.

“Based on the initial testimonies and other evidence we’ve gathered, there seems to be little doubt the security forces have been acting with blatant disregard for human life, and full investigations that are both impartial and independent are urgently needed,” said Philip Luther, Middle East and North Africa Programme Director at Amnesty International.

“While some protesters used violence, the authorities’ response was grossly disproportionate, seemingly not differentiating between violent and non-violent protesters. Bystanders were also caught-up in the violence.

“Security forces resorted to lethal force when it was not strictly necessary to protect lives or prevent serious injury – this is a clear violation of international law and standards. Previous promises to use graduated force when dispersing the sit-ins and provide ample warning and safe exits were quickly broken.”

On 14 and 15 August, Amnesty International researchers visited numerous hospitals and field hospitals in Cairo, as well as the city’s Zeinhum morgue and a mosque temporarily housing dozens of the dead. They documented scores of deaths, and eyewitness reports from medical staff who described how many of the injured and dead had sustained bullet wounds to the upper body.

“There were dozens of dead bodies and hundreds of injured people. They mostly sustained live ammunition wounds to the upper part of the body,” a doctor told Amnesty International.

A medical student described how Rabaa al-Adawiya hospital had to be evacuated after security forces entered the building amid heavy tear gas fire, and its first floor was set alight:

Other eyewitnesses reported that the heavy gunfire outside the hospital prevented the safe exit of the wounded, and led to the death of a hospital security guard.

A nurse at a field hospital at the Rabaa al-Adawiya sit-in told the organization how men in black uniforms threatened her at gunpoint:

“There was a gun pointing at me through the window. There were three men, two in black uniforms and one in civilian dress. The civilian screamed at me telling me to open the door, and asking if we had weapons inside… I pleaded with them that therewere only injured and dead inside.”

Amnesty International is calling for UN experts – especially the Special Rapporteur on extrajudicial, summary or arbitrary executions – to be given access to the country to investigate the circumstances of the violence and the pattern of excessive and unwarranted lethal force used by the Egyptian authorities since the “25 January Revolution”.

Given the Egyptian authorities’ poor track record in holding members of the security forces accountable for using excessive, and unwarranted, lethal force against protesters since the “25 January Revolution”,

Amnesty International is concerned about the ability of the Public Prosecution to conduct full, impartial and independent investigations.

As of Friday morning, Egypt’s Health Ministry reported 638 deaths across Egypt. Of these, 288 werein the Nasr City neighbourhood, the site of the main pro-Morsi sit-in at Rabaa al-Adawiya Square. This makes it the bloodiest single incident since the outbreak of the “25 January Revolution” more than two years ago.

By contrast, during the 18 days of the “25 January Revolution” in 2011, a total of 846 people were killed, according to official statistics.

The dispersal followed repeated threats by the Egyptian authorities to remove pro-Morsi protesters described as “terrorists” endangering “national security”. The smaller Nahda sit-in by Cairo University was cleared relatively quickly, while the operation to disperse the Rabaa al-Adawiya sit-in took about 10 hours of protracted clashes.

Around Cairo, three media workers were among the dead, and to Amnesty International’s knowledge, at least three female protesters and one child were killed on 14 August. Clashes were reported in Giza and numerous other neighbourhoods across Egypt.

Members of the armed forces denied Amnesty International access to the Ta’min al-Sihi Hospital, which reportedly received 52 corpses of those killed in the clashes, including at least one woman. It also dealt with more than 200 injuries – at least half of which required the injured to be hospitalized for treatment.

Workers at Cairo’s Zeinhum morgue told Amnesty International that by 10 am on Thursday, 108 autopsies had been carried out, and the facility was overflowing with corpses.

On 15 August, Amnesty International researchers visited the Iman Mosque, which was converted into a makeshift morgue after family members brought in relatives killed in the Rabaa al-Adawiya sit-in, as well as some of those evacuated from Rabaa al-Adawiya hospital.

At the time of the visit, there were 98 dead bodies inside, among them eight charred corpses – it is unknown whether they were burnt alive or after dying. Lists with names of 265 people had been hung on the mosque’s walls. Volunteers said that two more unidentified bodies had been brought in.

Particularly following the dispersals of the sit-ins, some Morsi supporters did use violence, including firearms, and launched attacks on the Giza Governorate building, police stations and security personnel.Police stations in Waraq and Kerdassa wereattacked, with police officers captured, killed and beaten. In several instances, members of the security forces were captured and beaten, and one grieving relative told Amnesty International that her cousin, a police officer, was decapitated on 14 August in Giza.

Protesters at Rabaa al-Adawiya told Amnesty International that they used rocks and Molotov cocktails and set police vehicles alight in an attempt to prevent the dispersal.

Amnesty International  also  called  on  the Egyptian  authorities  to take  immediate measures  to  improve security  for  Christians  and  other minorities  amid  an  alarming  rise in sectarian  violence  against  Coptic Christians,  seemingly  in  retaliation  for
their  alleged  support  of  the decision  to  oust  Mohamed  Morsi – including  attacks  on  churches, businesses  and  homes  in  several
governorates.  The  organization has  documented  previous  instances  where the  security  forces  have  failed  to
protect  Coptic  Christian communities from such attacks.