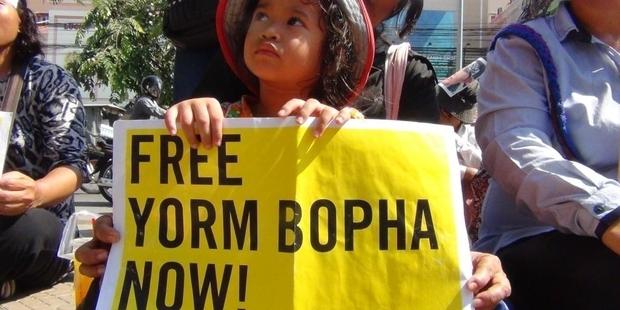 Yorm Bopha was arrested on 4 September 2012 on spurious charges and jailed for her activism for the Boeung Kak Lake community.(C)LICADHO

Yorm Bopha, a 30-year old mother of one who has defended her community’s housing rights, was arrested on 4 September 2012 and sentenced to three years’ imprisonment after an unfair trial in December last year.

“Yorm Bopha is a prisoner of conscience, jailed for her peaceful activism and defending the rights of those in her community who lost their homes through forced evictions,” said Isabelle Arradon, Amnesty International’s Deputy Asia Pacific Director.

“She should be released immediately and unconditionally.”

Cambodia is in the midst of a tense political standoff following the country’s disputed elections on 28 July 2013, with both the ruling Cambodian People’s Party and opposition Cambodia National Rescue Party claiming victory.

“Yorm Bopha must not be forgotten during the current political deadlock,” said Arradon.

“Her case and that of her community is representative of some of the issues that have led to growing dissatisfaction in Cambodia - unequal development, land conflict and forced evictions, and a justice system that fails to protect the rights of the poor and is used to stifle free speech.”

Yorm Bopha had been actively defending her community’s rights at the former Boeung Kak Lake in the capital Phnom Penh, where thousands of people have been forcibly evicted from their homes since the land was leased to a company in 2007.

She played a leading role in the campaign to release 13 women activists - the “Boeung Kak 13” - when they were convicted and sentenced to up to two-and-a-half years’ imprisonment in May 2012, after they took part in a peaceful protest.

Yorm Bopha was accused of planning an assault on two men in August 2012, and convicted in December last year for “intentional violence with aggravating circumstances”.

But witness testimonies during her trial were inconsistent, sometimes conflicting with each other, and some witnesses were apparently intoxicated when the alleged crime occurred.

Although an appeal hearing failed to resolve these inconsistencies in June 2013, the court upheld the original verdict while suspending one year of Yorm Bopha’s three-year sentence.

YormBopha has since appealed to Cambodia’s Supreme Court.

“The lack of evidence against Yorm Bopha makes it difficult not to conclude that she has been unfairly targeted by the authorities,” said Arradon.

“She is just one of many human rights defenders who have been harassed, threatened, attacked and locked up over the past years. The new government, once formed, must halt this disturbing trend as a matter of urgency, and ensure there is space in Cambodia for peaceful activists to conduct their important and legitimate work.”