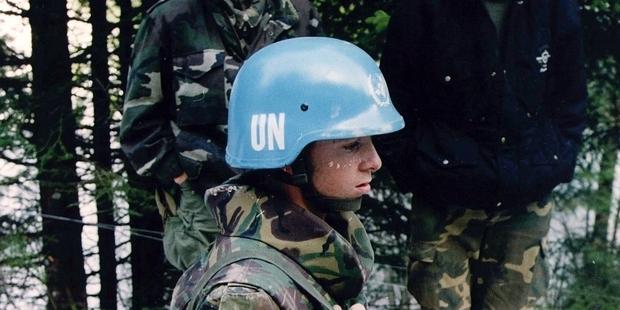 The Dutch Supreme Court ruling makes clear that states can be held responsible for the conduct of international peacekeepers. (C) ED OUDENAARDEN/AFP/Getty Images

A Dutch Supreme Court judgment finding the state liable for the deaths of three Muslim men amid the Srebrenica genocide marks a significant victory in the decades-long search for accountability, Amnesty International said today.

"Nearly two decades on from Srebrenica, this Dutch case marks the first time an individual government has been held to account for the conduct of its peacekeeping troops under a UN mandate," said Jezerca Tigani, Deputy Europe and Central Asia Programme Director at Amnesty International.

According to the court, Dutch troops serving as UN peacekeepers in Srebrenica sent three Bosniak Muslim men away from a "safe area" on 13 July 1995. This effectively handed them over to Bosnian Serb forces, who went on to kill some 8,000 Bosnian Muslim men and boys; many of their bodies have still not been found.

Rizo Mustafic, an electrician, as well as the brother and father of Hasan Nuhanović, an interpreter who assisted the Dutch battalion of UN peacekeepers (Dutchbat) in Srebrenica, died because the troops sent them away from a "safe area" under their control. Nuhanović's mother was also killed, but her death was not included in the current case.

They were expelled from the peacekeepers' compound despite the Dutch troops having witnessed multiple incidents of Bosnian Serb forces mistreating or killing men outside the “safe area".

The Supreme Court decision upholds a July 2011 local appeals court ruling in The Hague, in a civil case brought by relatives of the three men who were killed.

"This is a historic victory for the relatives of those who were killed in this case, but also marks a symbolic step for the thousands of other victims of Europe's worst crimes under international law since the Second World War," said Tigani.

The Dutch state has faced several lawsuits in the past in relation to its role in the Srebrenica genocide, but this is the first time it has been found responsible in a civil suit for any of the deaths.

"This Dutch Supreme Court ruling makes crystal clear that states can be held responsible for the conduct of international peacekeepers," said Tigani.

"It should pave the way for the Dutch government to provide full reparation--including compensation--to the relatives who brought this case, as well as other family members of victims of the Srebrenica genocide."

Past attempts to hold international peacekeepers criminally responsible for human rights violations have been unsuccessful, including in cases involving UN peacekeeping operations in Bosnia and Kosovo, and at the European Court of Human Rights.

Amnesty International has repeatedly highlighted the more than 10,000 unresolved cases of enforced disappearances dating back to the conflict.