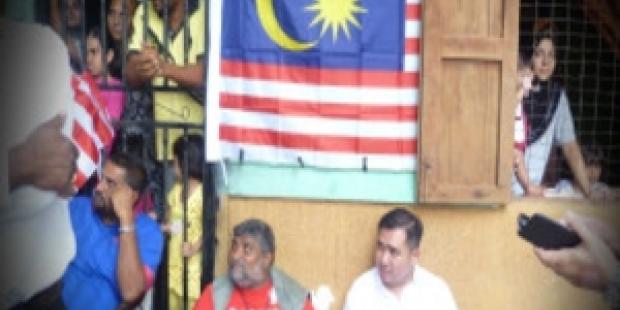 19 people were arrested at a peaceful protest against the demolition of a historic village in Malaysia.(C) FreeMalaysiaToday

Today's arrest of 19 people involved in a peaceful protest against the demolition of a historical village in Malaysia shows once again how the country’s authorities are taking a hard line against human rights defenders, Amnesty International said.

"If any more evidence was needed that the Malaysian authorities are restricting the space for human rights defenders to operate, today’s arrests show plain and simple where their priorities lie," said Isabelle Arradon at Amnesty International.

In its August 2013 report submitted to the Human Rights Council, Malaysia pledged that development of civil and political rights in the country would "keep pace" with progress made on economic social and cultural rights. However, earlier this week Amnesty International and SUARAM (Suara Rakyat Malaysia), a leading Malaysian NGO, observed that this has so far been an empty promise.

"Arbitrary arrests like this infringe on the right of protesters to peacefully exercise freedom of expression and assembly, and have a chilling impact on anyone engaged in defending human rights," said Arradon.

Those arrested on Thursday include human rights defenders such as SUARAM's executive director, SUARAM coordinator, opposition politicians, State Assembly representatives and Members of Parliament. They have since been released on bail pending a formal charge.

The protesters were arrested for “obstructing public servant[s]" from carrying out their work, under Article 186 of Malaysia's Penal Code. It carries a penalty of up to three months in prison in addition to a fine of 1,000 Malaysian Ringgit (approximately USD317).

Police arrested the group as they were peacefully protesting against the demolition of Kampung Hakka Mantin historical village, in the Malaysian state of Negeri Sembilan, south-west of the capital Kuala Lumpur. A number of local residents face eviction because of the demolition, which will make way for a mixed-use development.

One of the protesters told Amnesty International that the police were physically abusive towards the protesters, saying that they were "mishandled and a few were attacked by police aggressively." Amnesty International calls on the Malaysian authorities to investigate allegations of unnecessary and excessive use of force by the police during the arrests.

A protester told Amnesty International that police declined their efforts to negotiate peacefully. This was despite the fact that they had sought a stay order from the Court of Appeals, and were waiting for a decision at the time of the protest.

According to State Assemblyman Cha Kee Chin, the Court of Appeals issued a stay order for the demolition at 2:15pm local time on Thursday 31 October--after the protesters were arrested.

The arrests at Kampung Hakka Mantin come just a week after the UN Human Rights Council scrutinized Malaysia's human rights record as part of its Universal Periodic Review. The limited space for free expression and assembly in Malaysia was among the key concerns raised by UN member states during the event.

"The UN's recent review of Malaysia's human rights record reflected how little attention is paid to civil and political rights in the country. The Malaysian authorities need to put words into action, and ensure that free speech is fully protected both in law and in practice," said Arradon.