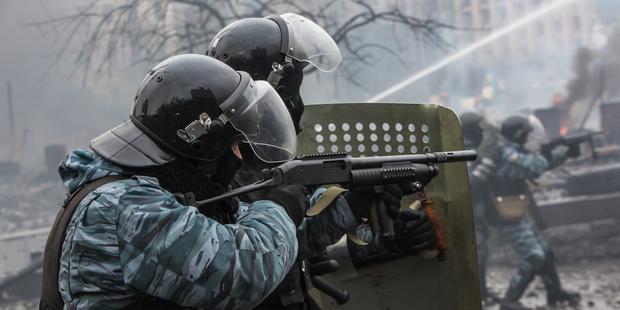 There is growing evidence from across Ukraine of vigilante groups colluding with the police (pictured firing rubber bullets).(C)Brendan Hoffman/Getty Images

The shooting of protesters, which is contributing to the spiralling death toll in Kyiv, is deeply troubling and must prompt a swift response to bring all those responsible to justice, Amnesty International urged.

According to the Ministry of Health, at least 35 people have been killed as a result of the rapid escalation in violence in the past 48 hours, especially in the area around Kyiv’s Maidan Square. The violence has been carried out by some protesters as well as security forces. The Ministry of Interior has separately reported that 20 police officers have died.

There is growing evidence from across Ukraine of vigilante groups colluding with the police and reports they may have been responsible for some of the shootings. A number of protesters, medical personnel and journalists clearly not posing a threat to riot police, have been fired on from a distance.

This senseless loss of human life is deeply disturbing. The Ukrainian authorities must take all measures in their power to stop and prevent the unlawful use of force and firearms, both by police officers and any vigilante groups who are colluding with them. All those responsible must be brought to justice.

With the Minister of Interior just announcing that police would now carry firearms, it is imperative that police restrict their distribution to fully trained firearms officers and use them only as a last resort in self-defence or the defence of others against the imminent threat of death of serious injury.