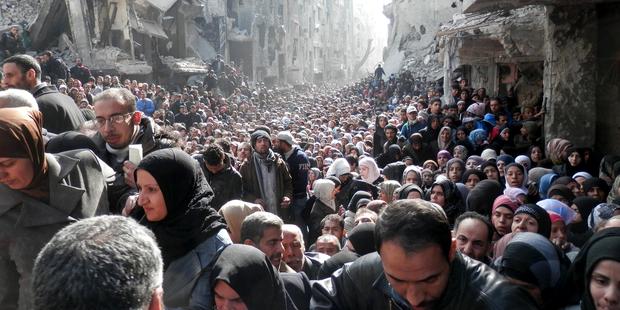 A new report by Amnesty International reveals that war crimes and crimes against humanity have been carried out on Palestinian and Syrian civilians in Yarmouk, on the outskirts of Damascus, which is under brutal siege by Syrian government forces.

The report, Squeezing the life out of Yarmouk: War crimes against besieged civilians, published ahead of the third anniversary of the crisis in Syria, highlights the deaths of nearly 200 individuals since the siege was tightened in July 2013 and access to crucial food and medical supplies was cut off. According to Amnesty International’s research, 128 of those who have died starved to death in the catastrophic humanitarian crisis that has emerged.

“Life in Yarmouk has grown increasingly unbearable for desperate civilians who find themselves starving and trapped in a downward cycle of suffering with no means of escape,” said Philip Luther, Director of the Middle East and North Africa Programme at Amnesty International.

The report highlights that government forces and their allies have repeatedly carried out attacks, including air raids and shelling with heavy weapons, on civilian buildings such as schools, hospitals and a mosque in Yarmouk. Some of the areas attacked had served as shelters for people who have been internally displaced by the conflict. Doctors and medical staff have also been targeted.

At least 60 per cent of those remaining in Yarmouk are said to be suffering from malnutrition. Residents told Amnesty International they had not eaten fruit or vegetables for many months. Prices have skyrocketed with a kilo of rice costing up to US$100.

“Syrian forces are committing war crimes by using starvation of civilians as a weapon of war. The harrowing accounts of families having to resort to eating cats and dogs, and civilians attacked by snipers as they forage for food, have become all too familiar details of the horror story that has materialized in Yarmouk,” said Philip Luther.

Despite the intermittent delivery of limited food supplies by the UN Relief and Works Agency (UNRWA) during January and February 2014 – the aid that has arrived is still woefully inadequate to meet basic needs. Aid workers have compared the efforts so far to a mere “drop in the ocean”. Renewed shelling of the area has resumed in recent days cutting off deliveries once more.

Hospitals have run out of even the most basic medical supplies.

Medical workers have also been repeatedly harassed. At least one doctor is believed to have died as a result of being tortured in custody.

“The siege of Yarmouk amounts to collective punishment of the civilian population, who do not deserve the suffering they have been forced to endure. The Syrian government must end its siege immediately and allow humanitarian agencies unfettered access to assist suffering civilians,” said Philip Luther.

A UN Security Council (UNSC) resolution calling for all parties to the conflict to immediately lift sieges of populated areas, unhindered access for humanitarian agencies and an end to violations of human rights and international humanitarian law, was agreed last month. But this has yet to lead to a tangible improvement in the situation of besieged civilians.

“The siege of Yarmouk is the deadliest of a series of armed blockades of other civilian areas, imposed by Syrian armed forces or armed opposition groups on a quarter of a million people across the country. These sieges are causing immeasurable human suffering and all of them must end immediately.”