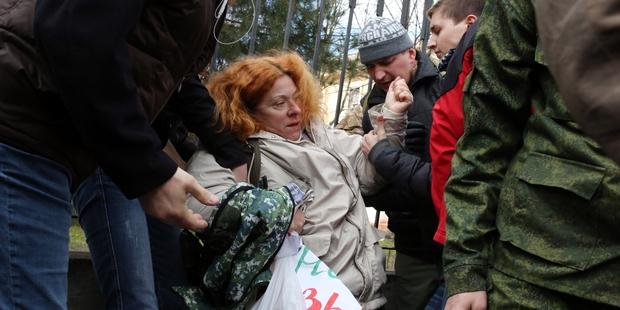 On 5 March, 100 men who identified themselves as the Crimean Self Defence League forced some 40 women to end their peaceful protest in Crimea’s capital, Simferopol. (C) VOLODYMYR PETROV/AFP/Getty Images

With the stand-off between Ukraine and Russia in Crimea intensifying and tensions in several towns and cities in the east of the country showing no signs of abating, there is an urgent need for the Organisation for Security and Cooperation in Europe (OSCE) to establish a monitoring mission with a strong human rights component and access to all parts of the country, including Crimea.

The last few days have seen a growing number of threats and intimidation of human rights monitors, independent observers, journalists and pro-Ukrainian protestors in Crimea.

On 6 March, representatives of the Organisation for Security and Cooperation in Europe (OSCE), Tim Guldimann, Personal Envoy of the Swiss OSCE Chair in Office, and Astrid Thors, High Commissioner for National Minorities, were forced to cut short their visit to Crimea due to security concerns. On both 6 March and again on 7 March, a team of observers from the OSCE was prevented from entering Crimea by unidentified armed personnel.

Amnesty International has spoken to a number of journalists and human rights defenders in Crimea.

Journalists and human rights defenders trying to document the events and report violations have been confronted by aggressive groups, some of them armed, including military units.  For example, on 5 March, a group of human rights monitors from EuroMaydan-SOS travelling from Simferopol to Evpatoriya tried to follow a column of around 20 military vehicles that had no number plates and no markings that would indicate which forces they belonged to. Their car was stopped, and all those inside ordered to get out at gunpoint. The military personnel ordered the activists to stop following them and go back. They refused to explain who they were and what they were doing in Crimea. When the activists insisted on their right to travel freely in Ukraine and refused to drive away, the men punctured the tires of their car and left.

In the atmosphere of growing tensions and conflicting allegations, there is an urgent need for international human rights monitors and for an independent fact-finding mission in Crimea but also in other parts of Ukraine where tensions remain high. Such a mission has been proposed by a number of OSCE member states, but is reportedly opposed by Russia and the new de facto authorities in Simferopol, the capital of the Republic of Crimea, loyal to them.

Amnesty International calls on the de facto authorities in Crimea and the Russian forces present there to:

Amnesty International calls on the Ukrainian authorities to ensure compliance with its international human rights obligations elsewhere in Ukraine and in particular to:

Amnesty International calls on the OSCE Permanent Council to take a prompt decision on sending a Monitoring Mission with a strong human rights component to Ukraine, including Crimea, and for all authorities to ensure that they have unimpeded access to all parts of the country.