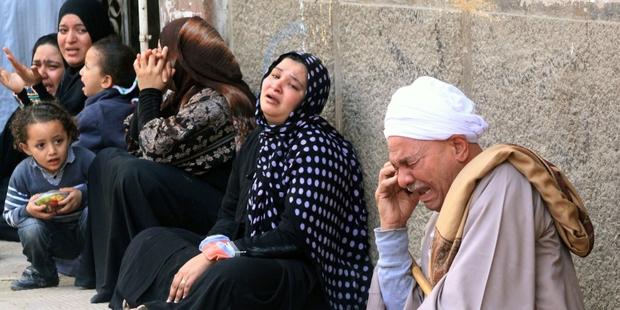 Egyptian relatives of those sentenced to death react to the news outside the Minya Criminal Court. © AFP/Getty Images

Today’s mass death sentences handed down by an Egyptian court are a grotesque example of the shortcomings and the selective nature of Egypt's justice system, Amnesty International said.

According to state media reports, in a single hearing this morning, the Minya Criminal Court sentenced 529 supporters of former President Mohamed Morsi to be executed for their alleged role in violence following his ousting in July last year.

“This is injustice writ large and these death sentences must be quashed. Imposing death sentences of this magnitude in a single case makes Egypt surpass most other countries’ use of capital punishment in a year,” said Hassiba Hadj Sahraoui, Deputy Middle East and North Africa Programme Director at Amnesty International.

"This is the largest single batch of simultaneous death sentences we’ve seen in recent years, not just in Egypt but anywhere in the world.

“Egypt's courts are quick to punish Mohamed Morsi's supporters but ignore gross human rights violations by the security forces. While thousands of Morsi's supporters languish in jail, there has not been an adequate investigation into the deaths of hundreds of protesters. Just one police officer is facing a prison sentence, for the deaths of 37 detainees.

“Without an independent and impartial process that can deliver truth and justice for all, many will question whether Egypt's criminal justice system has indeed anything to do with justice. In any event, recourse to the death penalty is inherently unjust, and the Egyptian authorities should impose a moratorium on executions, with a view to abolishing it.”

Egypt’s authorities do not release figures on death sentences and executions, despite repeated requests over the years by Amnesty International. The organization knows that Egyptian courts handed down at least 109 death sentences in 2013, after at least 91 death sentences in 2012, and at least 123 in 2011. The last known execution was carried out in October 2011, when one man was hanged for the killing of six Coptic Christians and a Muslim police guard in a drive-by shooting in January 2010.