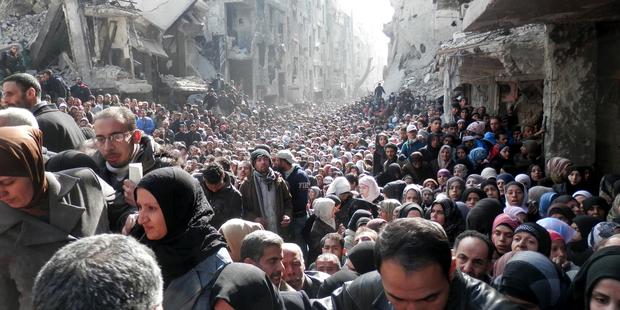 Government forces continue to enforce sieges, including upon 20,000 civilians in Yarmouk, south of Damascus.(C)unrwa.org

The UN Security Council must take concrete action, including threatening targeted sanctions, against parties in Syria that are brazenly flouting the terms of a unanimous UN resolution calling for immediate humanitarian access and an end to human rights abuses, said Amnesty International.

The Council is due to discuss Secretary General Ban Ki-moon’s second report on the implementation of the UN resolution.

If the Security Council is to salvage what credibility it has left on Syria it has to ensure its unanimous decision is respected, including by making good on its intention to take further steps to get the different parties to comply. Additional measures, including sanctions, must be taken against those responsible for violating the terms of the resolution.

More than 9 million people in Syria urgently need humanitarian aid, including those under siege and in hard-to-reach areas. Arbitrary detentions and abductions as well as indiscriminate attacks on civilians have continued unabated. Government forces are mostly responsible but armed groups are also to blame.

Under the terms of Resolution 2139 adopted in February, Security Council members are committed to “take further steps” if the resolution is not being implemented.

If Russia is serious about the legitimacy and credibility of the Security Council, as it consistently claims, then it should support decisive Council action and not allow resolution 2139, which it voted for, to continue to be so callously disregarded.

Government forces continue to enforce sieges, including upon 20,000 civilians in Yarmouk, south of Damascus. Since Amnesty International published its last report on the situation in Yarmouk in March 2014, which included details of 194 siege-related deaths among residents, all said to be civilians, at least 60 further such deaths have been reported.

Practices of arbitrary detention, enforced disappearances, torture and deaths in custody continue relentlessly.   The authorities have also failed to comply with the resolution’s call to release all arbitrarily held detainees, who include prisoners of conscience.  Despite a few recent releases, armed groups also continue to hold civil society activists and others.