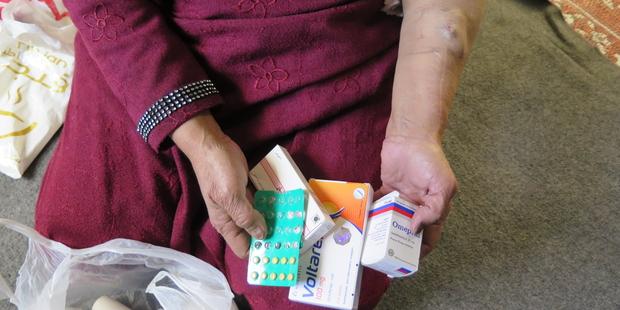 In some cases, Syrian refugees in Lebanon have been turned away from hospitals.(C)Amnesty International

A severe shortfall in international support has left many Syrian refugees in Lebanon unable to access crucial medical care, according to a new report by Amnesty International. The situation is so desperate that in some cases refugees have resorted to returning to Syria to receive the treatment they need.

The report, Agonizing Choices: Syrian refugees in need of health care in Lebanon, identifies some serious gaps in the level of medical services available to refugees. In some cases Syrian refugees, including those requiring emergency treatment, have been turned away from hospitals.

The UN has appealed for US$1.7 billion for Lebanon in 2014, as part of a US$4.2 billion UN appeal for Syrian refugees, yet only a pitiful 17 per cent of the funds have so far been secured.

The health system in Lebanon is highly privatized and expensive, leaving many refugees reliant on care subsidized by the UN Refugee Agency, UNHCR. However, due to a shortage of funds it has been forced to introduce a restrictive set of eligibility criteria for people in need of hospital treatment. Even when refugees meet the tight criteria, most must pay 25 per cent of the costs themselves.

Syrian refugees suffering from serious health conditions requiring hospital care or more complicated treatments often go untreated. Arif, a 12-year-old boy, who had suffered severe burns on his legs, is among those who were denied hospital treatment, causing his condition to deteriorate. His burns turned septic and his legs swelled and became infected. Under UNHCR’s current guidelines he does not qualify for subsidized care, so the agency was only able to cover the cost of his treatment for five days.

“Arif’s story is a heart-breaking example of the impact that restrictions on provision of medical care can have on the lives of Syrian refugees in Lebanon,” said Audrey Gaughran.

Eventually, a local charitable network found a volunteer doctor to operate on Arif but he still reportedly requires 13 more operations which cannot be carried out in Lebanon due to the lack of more specialized equipment.

“Both the UN and refugees are facing agonizing choices,” said Audrey Gaughran.

“UNHCR and its partners are prioritizing primary health care and treatment for life-threatening emergencies. Such prioritization is vital, but humanitarian health professionals on the ground speaking to Amnesty International were clear that the current limitations on support for hospital care for refugees could be lessened if the relief funding improved.”

Many Syrian refugees living with cancer and other long-term illnesses are also unable to afford expensive treatments they require in Lebanon. An increasing number of families face crippling debts due to mounting medical costs. One Syrian refugee, Amal, has to make the journey back to Syria twice a week for kidney dialysis, which she cannot afford in Lebanon. “I feel afraid to go to Syria, but I have no choice,” she told Amnesty International.

Some cases that are initially relatively straightforward to treat have become life threatening due to complications caused by lack of treatment.

“Illness is driving whole families into debt. There is very little work available for Syrian refugees, most of whom arrived in Lebanon with little or nothing. People have faced a choice between paying for medical care or rent or food,” said Audrey Gaughran.

“It’s time for the international community to recognize the consequences of its failure to provide adequate assistance to refugees from the conflict in Syria. There is a desperate need for countries to fulfil the humanitarian appeal for Syria and step up efforts to offer resettlement places for the most vulnerable of refugees, including those in dire need of medical treatment,” said Audrey Gaughran.

Amnesty International recognizes that the influx of refugees has placed an overwhelming strain on Lebanon’s resources, including health services. However, it is also calling on the government to adopt a long- term strategy for coping with health care needs for the Syrian refugee population.

“Lebanon must develop a national health strategy that makes provisions for everyone in Lebanon, including poor and disadvantaged Lebanese and the refugee population,” said Audrey Gaughran.

“Lebanon faces difficult choices in coping with the needs of its own population and its obligations towards refugees. It cannot be left alone to deal with one of the most acute refugee crises in history. This is a shared international responsibility and countries that have the economic means must step up to it.”

Lebanon is overburdened and under- resourced to sufficiently deal with the ever-growing Syrian refugee crisis. There are currently more than one million registered refugees from Syria in Lebanon. The number is expected to reach 1.5 million by the end of 2014 - which would be equivalent to a third of the country’s pre-Syria war population.

Registered Syrian refugees can seek access to health care in Lebanon through a UNHCR-run programme. Due to limited financial resources available, UNHCR has adopted an approach which prioritizes primary health and emergency care over more costly and complex treatments and hospital care.