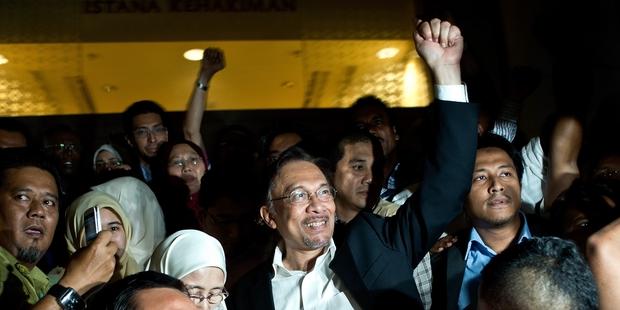 Police in Malaysia are re-opening a sedition investigation relating to a speech given by opposition leader Anwar Ibrahim.(C)MANAN VATSYAYANA/AFP/Getty Images

Police in Malaysia this morning announced that they are re-opening a sedition investigation relating to a speech given by Anwar Ibrahim, criticizing the government, made during a political rally in March 2011. He will be questioned by police on Friday 26 September 2014 and is, according to one of his lawyers, likely to be charged under the Sedition Act.

“This case is clearly political and smacks of persecution – the investigation should be dropped immediately. Anwar Ibrahim has been a favourite target of the authorities for more than a decade, and this appears to be the latest attempt to silence and harass a critical voice,” said Rupert Abbott, Amnesty International’s Deputy Asia-Pacific Director.

Over the past months, Malaysian authorities have intensified their use of the Sedition Act, a colonial-era law that criminalizes criticism of the government, to target peaceful dissidents.

Two student activists have been sentenced under the Sedition Act in recent weeks. On 19 September, Adam Adli was sentenced to one year in prison, while Safwan Anang was sentenced to 10 months' imprisonment on 5 September. In February, prominent human rights lawyer Karpal Singh was also found guilty of sedition. He passed away in a road traffic accident pending an appeal against his conviction.

At least 15 individuals – including activists, opposition politicians, journalists, students and academics – are currently facing charges under the Sedition Act and could face fines or imprisonment. Anwar Ibrahim’s lawyer, Padang Serai MP N Surendran, is among those facing charges.

“The Sedition Act is an outdated and repressive piece of legislation that the authorities are using to target anyone who speaks out against those in power. It must be repealed immediately,” said Rupert Abbott.

“There has been a disturbing increase in the use of the Sedition Act over the past few months against individuals who have done nothing but peacefully express their opinions. This crackdown is creating a climate of fear in Malaysia and must end.”