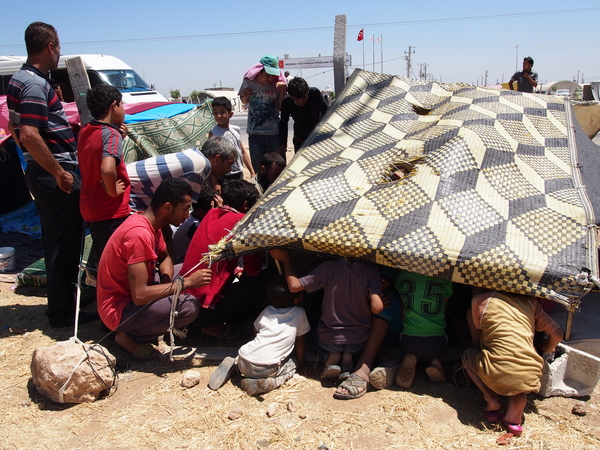 Syrians trying to get into the Turkish government-run refugee camp in Akçakale, near the Syrian border. There was no room for them, so they had been waiting outside for weeks or months.

The international community’s failure to deal with the growing number of Syrian refugees fleeing into Turkey has led to a crisis of unprecedented proportions with refugees facing push-backs and live fire at the border and hundreds of thousands living in destitution, said Amnesty International in a new report published today.

The report documents serious human rights risks faced by the 1.6 million people who have sought refuge in the country over the last three and a half years. It also highlights the deplorable reluctance of the international community to take meaningful financial responsibility for the refugee crisis.

“Turkey is clearly struggling to meet even the most basic needs of hundreds of thousands Syrian refugees. The result is that many of those who have made it across the border have been abandoned to a life of destitution. The humanitarian assistance offered by the international community has been pitifully low, but Turkey also needs to do more to request and facilitate it,” said Andrew Gardner, Amnesty International’s Researcher on Turkey.

“While Turkey has officially opened its border crossings to Syrian refugees, the reality for many of those trying to escape the ravages of war is a different story. Many are pushed back into the war zone with some even facing live fire.”

Turkey is host to half of the 3.2million women, men and children who have fled violence, persecution and other human rights violations in Syria. So far Turkey says it has spent $4billion on the refugee crisis. Meanwhile up until the end of October 2014, only 28 per cent of the $497million earmarked for Turkey in the UN’s 2014 regional funding appeal for Syrians has been committed by international donors.

Turkey, along with the other neighbouring countries– Lebanon, Jordan, Iraq and Egypt – host 97 per cent of Syria’s refugees.

“Turkey has shouldered a significant part of the financial burden on its own. The reluctance of wealthy countries to take greater financial responsibility for the refugee crisis as a whole and the paltry offers of resettlement are deplorable,” said Andrew Gardner

Shot at the border

While Turkey maintains an open-border policy for Syrian refugees at official crossing points, there are only two fully open points along a 900km stretch of the border. Even at these, those without passports are routinely turned away unless they have urgent medical or humanitarian needs.

Added to this, the border crossings are perilously far for the majority of refugees to travel.  Many have no option but resort to difficult and often dangerous irregular crossing points in conflict zones – often relying on smugglers. Here they are often met with force.

Amnesty International has recorded that at least 17 people have been killed by border guards using live ammunition at unofficial crossing points between December 2013 and August 2014. To shoot at people who are fleeing conflict and are desperately seeking safe haven is despicable.

Ali Özdemir, aged 14, was shot in the head on the night of 18 to 19 May 2014 when approaching the Turkish border. His father told Amnesty International that Ali was with nine other refugees. About 10 metres before the Turkish border, they heard people speaking Turkish. Ali was afraid. Just as he decided to turn back from the border, he was shot in the side of the head. There was no verbal warning and there were no warning shots in the air. Ali was blinded in both eyes.

Out of the 1.6 million Syrian refugees in Turkey only 220,000 are living in the 22 well-resourced camps which are currently operating at full capacity. More than 1.3million refugees are left to fend for themselves. According to Turkish government sources, only 15 per cent of Syrian refugees outside official camps receive assistance from humanitarian agencies and organizations.

The need to provide basic food and shelter means that families resort to desperate measures to try and make ends meet – even putting their children to work.

Ten-year old “Ibrahim” and his family fled Aleppo two years ago and moved to the Turkish border town of Kilis, where they live in a cement bunker. To survive, father and son collect plastic from garbage bins, earning 1 TL (50 cents) for each ½ kg of plastic. Young Ibrahim told Amnesty International that he wakes up each day at 6 am and finishes work at around 4 pm. On some days he has time to learn reading and writing from the local Imam. None of the other nine children in the family goes to school.

“The reality that most Syrian refugees face once they have escaped the ravages of war is grim and hopeless. They are abandoned by the international community. The world’s wealthiest nations are dragging their feet when it comes to offering financial support and resettlement,” said Andrew Gardner.