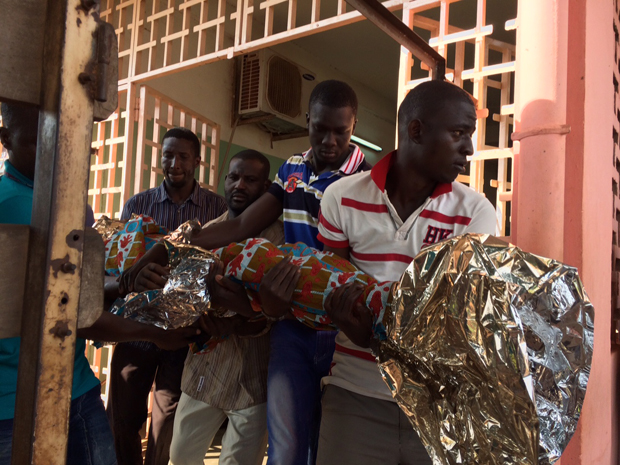 The rape of a 12-year-old girl and the apparent indiscriminate killings of a 16-year-old boy and his father by UN peacekeeping forces in the Central African Republic must be urgently investigated, with those implicated in the crimes suspended immediately, Amnesty International said.

The rape of a 12-year-old girl and the apparent indiscriminate killings of a 16-year-old boy and his father by UN peacekeeping forces in the Central African Republic must be urgently investigated, with those implicated in the crimes suspended immediately, Amnesty International said.

The incidents took place on 2 and 3 August as peacekeeping forces from the UN Multidimensional Integrated Stabilization Mission in the Central African Republic (MINUSCA) were carrying out an operation in the capital Bangui’s PK5 Muslim enclave.

“An independent civilian investigation must be urgently launched and those implicated must be suspended immediately and for the duration of the investigation.”

Amnesty International interviewed 15 witnesses in the immediate aftermath of both incidents, as well as the girl and members of her family. A nurse who examined the girl found medical evidence consistent with sexual assault.

The girl had been hiding in a bathroom during a house search at approximately 2am on 2 August. A man allegedly wearing the blue helmet and vest of the UN peacekeeping forces took her outside and raped her behind a truck.

“When I cried, he slapped me hard and put his hand over my mouth,” the girl told Amnesty International.

A MINUSCA spokesperson told Amnesty International that the operation was carried out by Rwandan and Cameroonian police and gendarmes belonging to the UN peacekeeping forces. During armed clashes with residents of the enclave early in the morning of 2 August, a Cameroonian soldier was killed and nine other soldiers were injured.

The following day, UN peacekeeping forces returned to PK5. Witnesses told Amnesty International that the peacekeepers were not under any threat but began shooting indiscriminately in the street where the killings had taken place.

Balla Hadji, 61, and his son Souleimane Hadji, 16, were struck by bullets in front of their house. Balla was apparently shot in the back, while Souleimane was shot in the chest. A neighbour who witnessed the killings told Amnesty International that “they were going to shoot at anything that moved.”

Without responding to the substance of Amnesty International’s questions about the PK5 operation, a MINUSCA spokesperson said it has opened an initial internal investigation into the operation.

In recent months, the UN has been criticized for its lack of adequate response to allegations of sexual abuse of children by international military forces in the Central African Republic. UN Secretary-General Ban Ki-moon recently set up an External Independent Review Panel to examine the UN’s handling of these allegations of sexual exploitation and abuse, and to make recommendations as to how the UN should respond to similar allegations in the future. The UN and all its troop-contributing countries must fully adhere to its stated “zero tolerance” policy on sexual exploitation and abuse.

“These allegations of rape and indiscriminate killing committed by UN troops are supported by physical evidence and multiple witness accounts. There must be a prompt and thorough investigation by a competent civilian authority and the girl must receive full support including medical and psychological care,” said Joanne Mariner.

“UN peacekeeping forces in Bangui should review their rules of engagement to ensure they are taking all feasible precautions to avoid incidental loss of civilian life.”

A UN police operation aimed at apprehending a criminal suspect who lives in the PK5 enclave of Bangui began sometime after 1am on 2 August. The area is home to more than 10,000 Muslims, but many Christians also live there.

During a house search carried out as part of the operation, the men of the family were taken away while the women and children were brought together in one room. The UN peacekeepers were yelling; the children were crying, and the scene was quite chaotic. It was only later that the women noticed that a 12-year-old girl was missing.

The girl told Amnesty International that she had hidden in a bathroom out of fear when the search began, and that a UN peacekeeper had found her there. She said that he dragged her out of the room, and slapped her when she started to cry.

He brought her outside into a far corner of the courtyard behind a truck, groping her breasts and tearing her clothes. She later showed Amnesty International her torn underwear.

Then, she told Amnesty International: “He threw me to the ground and lay down on top of me.”

Whilst raping her, gunfire erupted outside and he fled the compound to rejoin the larger group of peacekeeping troops.

Family members who were at the house during the search operation told Amnesty International that the girl was separated from the rest of the family for about 20-30 minutes. One sister recalled: “When she returned from the back of the courtyard, she cried ‘mama’ and fainted. We brought her inside the house and splashed water on her to revive her.”

The girl’s mother told Amnesty International that after the incident her daughter was crying and acting extremely upset. “I had her sit in a pan of hot water,” the mother explained—a traditional method of treating sexual abuse.

She was later examined by a nurse working under a doctor’s supervision, who found medical evidence consistent with sexual assault.

Following armed clashes with residents on 2 August, UN peacekeeping forces returned to PK5 the next morning. A group of youths had built several barricades on the main avenue to try to block the peacekeeping troops from moving around the area, and they exchanged fire with the troops on that avenue, a few blocks from the main roundabout.

Witnesses said, however, that there was no gunfire or other threats to the peacekeeping troops on the street where the killings occurred, located in the Yambassa quarter. The soldiers had divided into two single-file lines, walking down both sides of the street, shooting frequently as they walked.

A mechanic who was working a block away from the street on which the killings occurred said that MINUSCA troops shot twice at him and another mechanic that morning. “One of the bullets even broke the window of the car I was working on,” he said. When he and his colleague put their hands in the air, he told Amnesty International, the troops stopped shooting and allowed the two to flee to safety.

Balla Hadji, a 61-year-old truck driver, was having breakfast with his wife when the troops arrived; their daughter had left the house to visit a neighbour. Hearing the shots and realizing that his daughter was outside, Balla left the family compound to call for her to return. “Just at that moment,” said the neighbour, “the troops arrived at the corner of our street. They shot Hadji in the back as he was turning around to try to get back inside his compound.”

Balla Hadji’s 16-year-old son, Souleimane, was inside the compound at the time; he ran to his father, who was falling to the ground. He too was shot.

Amnesty International later visited the compound and saw two apparent bullet holes in the tin door and wall of the compound.

The family told Amnesty International that the UN peacekeeping troops did not help them to transport the wounded man and boy to the hospital. Rather than provide assistance, witnesses said, the peacekeepers fired another round when the daughter tried to cross the street to reach her injured relatives.

Balla Hadji lost a lot of blood very quickly, and died on the spot. Neighbours managed to transport Souleimane to the hospital for emergency treatment, but he died at about 3:30pm that day.