The report, Chains of Abuse: The global diamond supply chain and the case of the Central African Republic, documents several other abuses in the diamond sector, including child labour and tax abuse.

CAR’s diamond companies could soon start exporting diamonds stockpiled during the on-going conflict in which 5,000 have died. An export ban in place since May 2013 will be partially lifted once the government meets conditions set in July 2015 by the Kimberley Process, which is responsible for preventing the international trade in blood diamonds. Before the conflict, diamonds represented half the country’s exports.

“If companies have bought blood diamonds, they must not be allowed to profit from them,” said Lucy Graham, Legal Adviser in Amnesty International’s Business and Human Rights Team.

“The government should confiscate any blood diamonds, sell them and use the money for the public benefit. The people of CAR have a right to profit from their own natural resources. As the country seeks to rebuild, it needs its diamonds to be a blessing, not a curse.”

Based on interviews with miners and traders, the report details how armed groups - the Christian or animist anti-balaka and predominantly Muslim Séléka - both profit from the diamond trade by controlling mine sites and “taxing” or extorting “protection” money from miners and traders.

It also documents the inspection gaps in diamond trading centres that make it possible for blood diamonds to be traded and sold globally. 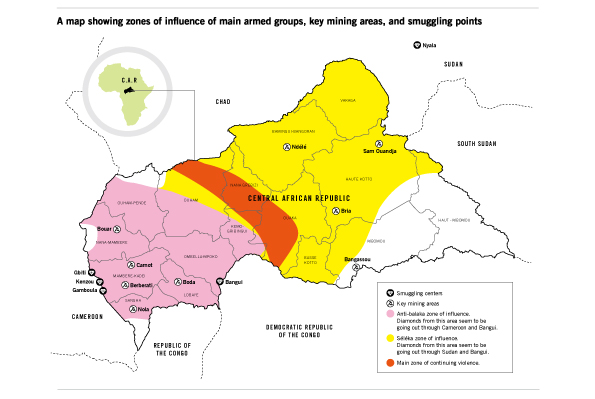 There is a high risk that the country’s biggest buyer of diamonds during the conflict, Sodiam, which has amassed a 60,000 carat diamond stockpile worth US$7 million, has purchased and is still purchasing diamonds that have financed the anti-balaka, the report said.

The UN has already black-listed second-biggest trader, Badica, and its Belgian sister company, Kardiam, for buying and smuggling diamonds from Seleka-controlled areas in the east of CAR.

In May 2015, a Sodiam representative in Carnot confirmed to Amnesty International that the company has been buying diamonds in the west of CAR despite the conflict, and keeping them until they can be exported.

The report documents the significant involvement of the anti-balaka in the diamond trade in the west of CAR. Traders who Amnesty International spoke to in that area were aware of the anti-balaka’s involvement, but none appeared to actively screen out diamonds that may have funded the armed group. One of these traders, who said it was too dangerous for security reasons to visit mine sites, showed Amnesty International receipts for sales to Sodiam. Other traders who sold to Sodiam made similar admissions to the UN.
Sodiam denies ever buying conflict diamonds. The company says that it does not buy diamonds from mines controlled by rebel groups or traders known to associate with them, but Amnesty International challenges their due diligence processes.

Amnesty International wants the CAR government to confiscate diamonds unless Sodiam and other exporting companies can prove they have not financed armed groups.

With the diamond industry due to gather at the Jewellery Industry Summit in March 2016 to discuss responsible sourcing, Amnesty International is challenging governments and international diamond companies like de Beers and Signet to support stronger regulation of the sector.

“International diamond companies need to look closely at the abuses along their supply chain, from child labour to tax abuse. By focusing only on conflict diamonds, the Kimberley Process camouflages all the other human rights abuses and unscrupulous practices associated with diamonds,” said Lucy Graham.

“This is a wake-up call for the diamond sector. States and companies can no longer use the Kimberley Process as a fig leaf to reassure consumers that their diamonds are ethically sourced.” 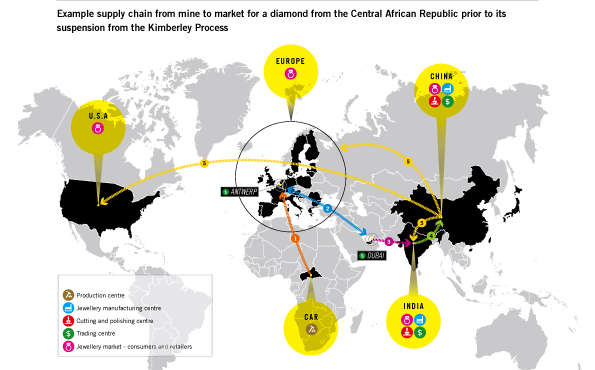