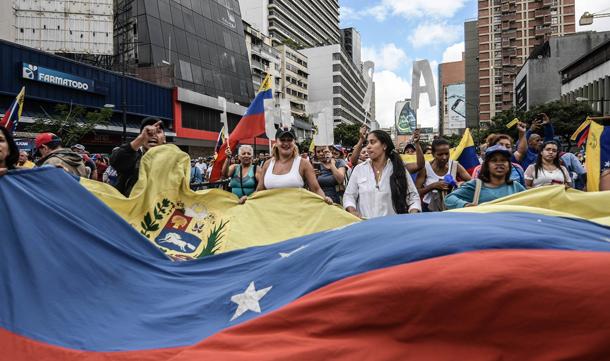 Venezuelan security forces under the command of Nicolás Maduro executed and used excessive force against people, and arbitrarily detained hundreds of others in an escalation of their policy of repression as a means of controlling the people of Venezuela and particularly to punish residents of impoverished neighborhoods that decided to protest between 21 and 25 January 2019, said Amnesty International today.

Venezuela has suffered a major crisis of massive human rights violations for years, with shortages of food, medicines, hyperinflation, violence and political repression forcing more than three million people to flee the country since 2015.

Faced with this bleak reality, thousands have taken to the streets to demand a change in government. From 21 to 25 January, numerous demonstrations were registered, many of them in impoverished areas. There is a strong presence of pro-Nicolás Maduro armed groups in these areas, where residents depend to a large extent on the currently limited state programs to distribute staple foods.

In just five days, at least 41 people died during these protests, all of them from gunshot wounds. More than 900 were arbitrarily detained, and just on 23 January (the day that demonstrations were held across the country), 770 arbitrary arrests were reported.

During a research mission in the states of Lara, Yaracuy, Vargas, and different locations in Caracas, from 31 January to 17 February, Amnesty International gathered more than 50 testimonies and documented 15 emblematic cases, including some of serious human rights violations and crimes under international law.

The evidence gathered shows typical patterns. These indicate that the state authorities carried out selective extrajudicial executions as a method of social control using the Bolivarian National Police (PNB), mainly through its Special Actions Force (FAES), against people who participated in some way in the protests. The more impoverished areas of Caracas and other parts of the country were particularly affected and stigmatized, registering the highest numbers of victims, who were later presented as "criminals" killed in clashes with the authorities.

Amnesty International documented six executions all with a similar modus operandi. In each case, the victims were in some way linked to the protests that had been held in previous days and the criticism that several of them had made against Nicolás Maduro had gone viral on social networks.

The six victims were all young men whom authorities publicly described as having been killed in clashes with the FAES. This public security force tampered with the crime scenes and portrayed the victims as delinquents.

Luis Enrique Ramos Suárez was 29 years old when FAES officers executed him on 24 January in the city of Carora. The day before, a voice note announcing protests against Nicolás Maduro and Carora's mayor's office had gone viral. In this voice note, Luis Enrique was mentioned by his nickname as one of the organizers.

On 24 January, the FAES illegally raided the Ramos Suárez household and mistreated the 10 family members who were present. They beat the other family members and then forcibly transferred them to another location. Minutes later, they shot Luis Enrique. He died immediately. According to the testimonies, FAES officers fired inside the house to simulate a shootout. They tampered with the crime scene, dragging the corpse to a vehicle in which it was finally transferred to the morgue.

Excessive use of force

Amnesty International also documented the cases of two young men killed and a young man wounded by firearms in protests.

Alixon Pizani, a 19-year-old baker, died on 22 January from a bullet wound to the thorax. Alixon's family says that FAES officials began firing rounds at his friends and relatives at the hospital entrance to where Alex was transfered, who immediately took refuge inside.

According to Venezuela's Foro Penal, the authorities detained 137 children and adolescents throughout the country from January 21 to 31. Of those cases, Amnesty International documented the arbitrary detention of six people, including four teenagers who participated in a protest, or simply watched it from close by, in the city of San Felipe on January 23.

In an interview with Amnesty International, they said that upon being arrested, the authorities beat them, called them "guarimberos" (protestors who use violence) and "terrorists", exposed them to irritant substances, deprived them of sleep, and threatened to kill them. According to their testimony, the officials who detained them belonged to several different state security forces and were accompanied by people dressed in civilian clothes.

"Arbitrarily detaining more than a hundred adolescents and subjecting them to cruel treatment, which at times may have constituted torture, shows how far the authorities are willing to go in their desperate attempts to stop the protests and subdue the population," said Erika Guevara-Rosas.

The four teenagers were accused of crimes that, according to national law, they should not have been held in detention for, yet they were imprisoned for eight days by court order. They spent four of those days at the Rehabilitation Center for Minors, a military institution where they had their heads shaved and were forced to sing phrases like "We are Chávez's children".

On 29 January, one of the judges in charge of three of these cases publicly stated that she had been ordered to keep the adolescents in custody, despite there being no legal justification. After making this complaint, she was removed from her position and left the country. The four adolescents are awaiting their trial and remain subject to restrictions on their freedom.

The young men expressed how frustrating it was to live in an economic, social and political crisis at their age, where studying, eating or finding clothing is a daily challenge. Some expressed their desire to leave Venezuela in search of a better future.

The Venezuelan authorities must put an end to the policies of repression that they have developed in recent years and fulfill their obligation to guarantee justice, truth and reparation for victims of human rights violations or crimes under international law.

"The Venezuelan justice system seems to have a policy of abandoning the victims of human rights violations. The few people brave enough to file reports are left defenseless and in danger due to the lack of a response from the authorities," said Erika Guevara-Rosas.

Due to the severe obstacles that obstruct the path justice in Venezuela, Amnesty International calls on the United Nations Human Rights Council to take action to address the total impunity that prevails in Venezuela, through the creation of an independent investigative body to monitor and report on the human rights situation in the country.

In addition, the Office of the Prosecutor of the International Criminal Court should consider these facts, and if it deems them well founded, incorporate them as part of the preliminary examination already underway on Venezuela.

Finally, countries genuinely concerned about the human rights situation in Venezuela should explore the application of universal jurisdiction, which serves as an alternative path to justice for victims that cannot access it locally.

"International justice is the only hope for victims of human rights violations in Venezuela. It is time to activate all available mechanisms to prevent further atrocities," said Erika Guevara-Rosas.