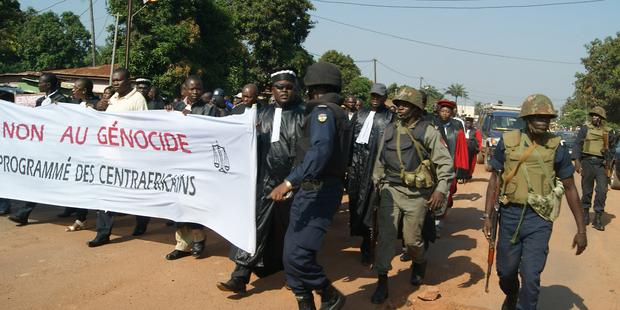 The UN must take full account of the human catastrophe of epic proportions unfolding in the Central African Republic (CAR) when considering the options presented by the UN Secretary-General on peacekeeping in that country.

The situation is worsening on a daily basis in CAR, with extrajudicial executions and other unlawful killings, rape and other forms of sexual violence against women and girls widely committed with total impunity by members of the security forces and armed groups alike.

The crisis is spinning out of control, despite the fact that it has been ignored by the international community for far too long.

People are dying in the Central African Republic as we speak, and action is needed as a matter of utmost urgency. There is no time to delay.

In a 30 October report, Amnesty International denounced large-scale human rights violations and abuses in CAR. Satellite images the organization published a week later showed the shocking aftermath of abuses, including hundreds of homes that had been burnt to the ground and evidence of mass internal displacement.

The security situation has quickly deteriorated since December 2012, when a coalition of armed groups launched an offensive against former President Francois Bozizé. Since Seleka seized power in March, violence by their fighters and armed opposition groups has spiraled out of control in what has now become a largely lawless country.

Tensions and clashes between different ethnic and religious communities are on the rise. The majority of the population is Christian--as was former president Bozizé. The current President Michel Djotodia and most members of the security forces are Muslim, as are former Seleka fighters, who are mostly from the north-east and from neighbouring Chad and Sudan.

In July 2013, the African Union declared that it would deploy some 3,500 soldiers to protect civilians in CAR. By the end of October approximately 2,600 of these troops have been deployed. France also has troops in CAR and has just announced the deployment of additional forces.

It is of vital importance that the UN work with other members of the international community, in particular, the African Union, the Economic Community of Central African States, and France to ensure that immediate concrete measures are put in place to establish law and order in the country.

The international community must take action before it is too late to ensure that the abuses come to an end and that CAR isn’t catapulted into the international spotlight because it became a human catastrophe.