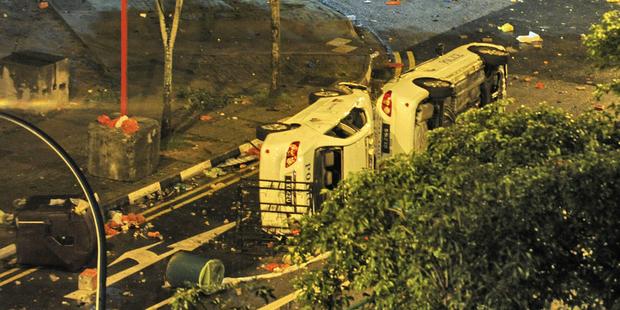 The Singapore authorities must prevent arbitrary deportation for 53 migrant workers set to be expulsed for their involvement in a riot, Amnesty International said today.

Singapore said the mainly Indian labourers would be "repatriated", while another 28 workers face criminal charges for their part in the unrest earlier this month.

“The Singapore authorities are moving too quickly – these men should not be arbitrarily deported as they have a right to due process," said Isabelle Arradon, Amnesty International's Asia Pacific deputy director.

"Those charged must have access to a lawyer and be provided with interpreters if necessary. Their right to a fair trial should be respected, and if some are convicted, it is crucial that their sentence should not include caning, which is a cruel and inhuman punishment."

Singapore's first riots for more than 40 years broke out on 8 December after an Indian construction worker was knocked down and killed by a bus in the Little India district.

Dozens, including police officers, were injured in the ensuing violence.

"It's important to remember that migrant workers face various forms of discrimination in Singapore. They are not afforded the same legal protection as nationals, and many work in very poor conditions," said Isabelle Arradon.

The right to freedoms of expression, assembly and association, and the principle of non-discrimination are afforded to citizens only in Singapore’s Constitution, thus effectively excluding migrant workers from these provisions.

"These riots should be a wake-up call to the Singapore authorities that conditions for migrant workers need to improve, rather than a catalyst for arbitrary deportations."

Singapore Deputy Prime Minister Teo Chee Hean said the deportations would "send a strong signal that we will not tolerate actions by anyone which threaten law and order in Singapore".

The men facing deportation include 52 Indian nationals and one Bangladeshi national.

"Singapore should ensure that migrant workers, which amount to around a quarter of its population, have their rights respected at all times in line with international law."