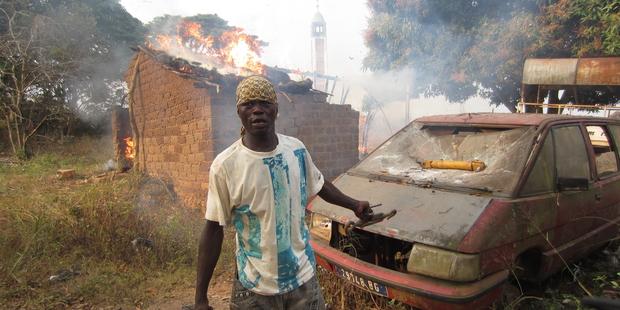 Burning/looting of Muslim property and a mosque in PK 26 area, north of the capital Bangui in late January.(C) Amnesty International

International peacekeepers have failed to prevent the ethnic cleansing of Muslim civilians in the western part of the Central African Republic, Amnesty International said in a report issued today.

To protect the country’s remaining Muslim communities, international peacekeeping forces must break the control of anti-balaka militias and station sufficient troops in towns where Muslims are threatened.

“The result is a Muslim exodus of historic proportions.”

Amnesty International criticized the international community’s tepid response to the crisis, noting that international peacekeeping troops have been reluctant to challenge anti-balaka militias, and slow to protect the threatened Muslim minority.

“International peacekeeping troops have failed to stop the violence,” said Donatella Rovera, senior crisis response adviser at Amnesty International “They have acquiesced to violence in some cases by allowing abusive anti-balaka militias to fill the power vacuum created by the Seleka’s departure.”

In recent weeks, Amnesty International has taken over one hundred first-hand testimonies of large-scale anti-balaka attacks on Muslim civilians in CAR's northwest towns of Bouali, Boyali, Bossembele, Bossemptele, and Baoro. International troops had failed to deploy to these towns leaving civilian communities without protection.

The most lethal attack documented by Amnesty International took place on 18 January in Bossemptele, where at least 100 Muslims were killed. Among the dead were women and old men, including an imam in his mid-70s.

To escape the anti-balaka’s deadly attacks, the entire Muslim populace has fled from numerous towns and villages while in others, the few who remain have taken refuge in and around churches and mosques.

International concern over the sectarian nature of the violence in the CAR led the UN Security Council in December 2013 to authorize the deployment of peacekeeping forces to the country. Those forces—comprised of about 5,500 African Union troops, known as MISCA, and 1,600 French troops, known as “Sangaris”—have been deployed within Bangui and to several towns north and southwest of the capital.

Even in the PK 5 neighbourhood at the centre of Bangui's Muslim community, thousands of frightened people are packing up and leaving home.

The journey to safety is difficult and dangerous. Convoys are frequently attacked by anti-balaka militia.

A small boy called Abdul Rahman told Amnesty International how, on 14 January, the truck he was travelling on was stopped at an anti-balaka checkpoint. They demanded that all the Muslim passengers get off. Six members of his family were then killed: three women and three small children, including a toddler.

The current violence, hatred, and instability are a direct result of the human rights crisis that began in December 2012, when mostly Muslim Seleka forces launched an armed offensive that culminated in their seizure of power in March 2013. In power for nearly ten months, the Seleka were responsible for massacres, extrajudicial executions, rape, torture, and looting, as well as massive burning and destruction of Christian villages.

As the Seleka withdrew, the international forces allowed the anti-balaka militias to take control of town after town. The resulting violence and forcible expulsion of Muslim communities were predictable.

The waning power of the Seleka has not lessened their brutality as they leave. Even with their movement and operational capability significantly hampered, they have continued to carry out vicious attacks on Christian civilians and their property. Armed members of Muslim communities, acting independently or alongside Seleka forces, have also carried out brutal and large scale sectarian attacks on Christian civilians.

“The urgency of the situation demands an immediate response,” said Joanne Mariner. “It is time for the peacekeeping operation in CAR to protect the civilian population, deploy to threatened areas, and stop this forced exodus.”