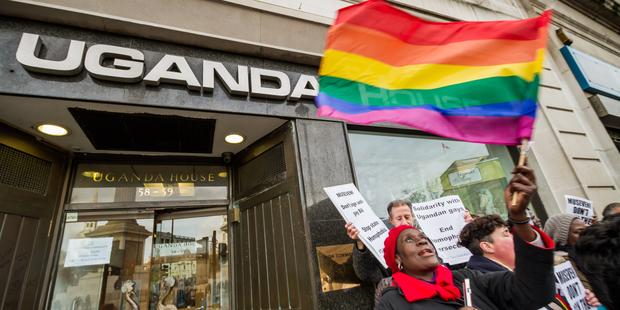 Lesbian, gay, bisexual, transgender, and intersex (LGBTI) people in Uganda have reported a surge in human rights violations since the passage of the Anti-Homosexuality Act on December 20, 2013, Human Rights Watch and Amnesty International said today.

In a country where the climate for LGBTI people was already hostile and discriminatory, LGBTI people have faced a notable increase in arbitrary arrests, police abuse and extortion, loss of employment, evictions and homelessness, and scores have fled the country. At least one transgender person has been killed since the bill was signed, in an apparent hate crime. Health providers have cut back on essential services for LGBTI people, who also fear harassment or arrest if they seek health care. The passing of this discriminatory law has not only opened the floodgates for a range of human rights violations against LGBTI people in Uganda, but has also ensured that victims of these violations are denied access to effective remedies. Sexual Minorities Uganda (SMUG), a Kampala-based organization, stated in a recent report that “the full force of the State, particularly the legislative and executive branches of government, is being used to hunt down, expose, demean and suppress Uganda’s LGBTI people.”

“The Anti-Homosexuality Act is creating homelessness and joblessness, restricting life-saving HIV work, and bloating the pockets of corrupt police officers who extort money from victims of arrest,” said Neela Ghoshal, senior LGBT rights researcher at Human Rights Watch. “Repealing this law is imperative to ensure Ugandans can live without fear of violence and harassment.”

Human Rights Watch and Amnesty International conducted research in Kampala and other Ugandan towns in April 2014, interviewing 38 individuals directly affected by the passage of the Anti-Homosexuality Act, four lawyers and paralegals, and four organizations that provide health services to LGBTI people. Human Rights Watch also interviewed eight LGBTI Ugandans in Nairobi, Kenya, who had fled Uganda between January and March 2014.

President Yoweri Museveni signed the Anti-Homosexuality Bill into law on February 24, 2014, and it came into force on March 10. The law permits sentences of life in prison for some sexual acts between consenting adults. It criminalizes the undefined “promotion” of homosexuality, a provision that threatens human rights advocacy work and prompted a police raid on a joint US government-Makerere University HIV research and intervention program. The law also criminalizes “a person who keeps a house, room, set of rooms, or place of any kind for purposes of homosexuality,” a provision that has been used to justify evicting LGBTI tenants. These new provisions reinforce existing ones in the country’s penal code that criminalize consensual same-sex sexual relationships between men.

Since the bill passed in December 2013, Human Rights Watch and Amnesty International are aware of at least 17 people who have been arrested based on allegations of consensual same-sex conduct with other adults or, in some cases, simply on the suspicion of appearing to be LGBTI.

In contrast, between 2007 and 2011, the Human Rights Promotion and Awareness Forum, a Ugandan group that tracks such cases and provides legal defense, reported that they were aware of 23 arrests on the basis of same-sex conduct, none of which resulted in prosecutions. The increase in arrests affects not only those detained, but the broader LGBTI population, since many live in fear of arrest and avoid any dealings with the authorities. LGBTI people who are victims of violence or discrimination say they fear reporting such cases to the police, concerned that they themselves could be arrested.

The most evident impact of the law has been significant uprooting of LGBTI people, many of whom have fled the country, and others who are homeless or in hiding within Uganda. Human Rights Watch interviewed 10 LGBTI people who had been evicted by landlords, who appear to be interpreting the Anti-Homosexuality Act to mean that it is illegal to rent to LGBTI people. Hanifa Q. (her name and most others have been changed for security reasons), a lesbian in Kampala, showed Human Rights Watch an eviction letter she received from her landlord on March 3. Giving her one month to vacate the property, it reads:

You have been nice to me and paying very well. But due to the existing situation in the country plus your behavior with your friends, forgive me to suspect you of being indecent, I cannot allow you to rent my house, I cannot fight the government.

Almost everyone else interviewed had to move to new homes in order to escape threats or scrutiny from neighbors, in some cases after being “outed” by tabloids and on television. At least 100 LGBTI people have fled the country since the beginning of 2014.

The law has also resulted in reduced access to health services and HIV prevention information for LGBTI people. On April 4, police raided the Makerere University Walter Reed Project, a US-funded HIV research and treatment center that provides health information and services to LGBTI people. The police claimed the center was “recruiting” people into homosexuality. Two community-based organizations that provided HIV testing, condoms, and lubricant to men who have sex with men (MSM) closed their doors after the bill became law. They have reinitiated some services, but no longer receive drop-in clients. TASO, Uganda’s largest HIV/AIDS organization, has suspended its “Moonlight Clinics,” through which it conducted outreach to MSM and other vulnerable groups, offering them HIV testing and education.

Shortly after the Act was signed, the health minister, Dr. Ruhakana Rugunda, publicly pledged that health services would be provided to LGBTI people in a non-discriminatory way. Serious concerns for how this could work in practice remain, given that the Ministry has no control over police actions, said Human Rights Watch and Amnesty International.

Interviews with LGBTI people indicate the risk of health care workers violating patient confidentiality. Jay M., a transgender man, said that when he sought treatment for a fever shortly after the bill was signed into law:

In the end, Jay paid the doctor 50,000 Ugandan shillings as a bribe and fled the office.

“As long as the Anti-Homosexuality Act remains in force, the Ministry of Health cannot make credible assurances that health care will be provided to LGBTI people without discrimination,” said Michelle Kagari, Eastern Africa deputy regional director at Amnesty International. “For many LGBTI people, the risks of seeking service will outweigh the benefits: one ‘bad apple’ within the health care system could send a gay or bisexual client to prison for life.”

The victims and lawyers interviewed said that most of those arrested since the bill passed have been released without charge. In seven cases that Human Rights Watch and Amnesty International documented, interviewees reported that police demanded bribes of between 30,000 (about US$12) and 1.5 million Ugandan shillings (about $634). Other victims were released with the assistance of lawyers. Three transgender people said that police sexually assaulted them in custody, touching their breasts and genitals. One HIV-positive transgender woman said she was denied access to her antiretroviral treatment (ART). In at least one case, police subjected men arrested on homosexuality charges to forced anal exams – a discredited method of seeking “proof” of homosexual conduct that constitutes a form of torture.

The threat of arrest means that LGBTI people can be attacked with impunity, Human Rights Watch and Amnesty International said. The week after Museveni signed the bill into law, a transgender sex worker in Kampala, known as “Queen,” was brutally attacked and killed by a man she met in a bar. Three friends of the victim interviewed by Human Rights Watch said they were afraid to report the killing to police, out of fear that as transgender women, they could be arrested. In March, three LGBTI people were lured to a house by men they met on social media, who abused them while subjecting them to homophobic insults. Two of the victims fled and filed complaints with the police, but the police responded with homophobic comments and the victims were afraid to pursue the complaints further.

The Anti-Homosexuality Act also has direct consequences on the livelihoods of LGBTI people. Six people told Human Rights Watch and Amnesty International they had been fired from their jobs since the bill was passed, on the basis of their perceived sexual orientation or gender identity. Others who ran small businesses or sold goods in the informal sector said that clients and other business people told them they would not be doing business with them anymore out of fear of being associated with them.

“Within just five months of the passage of the Anti-Homosexuality Bill through parliament, we are seeing its dramatic effects on the health and well-being of LGBTI people,” Ghoshal said.