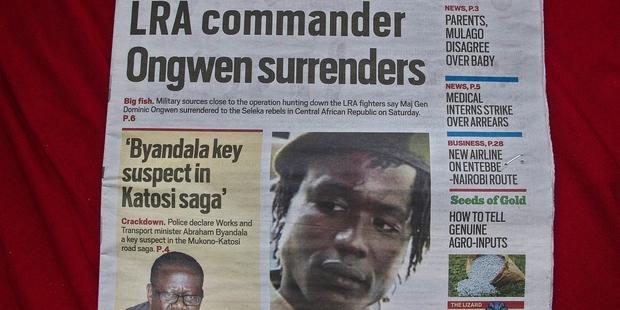 The impending transfer of Dominic Ongwen, alleged former commander of the Lord’s Resistance Army (LRA) to the International Criminal Court (ICC) is a step towards justice for the victims who have suffered brutality at the hands of the LRA for more than two decades, said Amnesty International today.

“This is a significant development in the pursuit for justice. The LRA abducted, killed and mutilated thousands in Uganda and committed atrocities, including the use of child soldiers and sexual slavery,” said Sarah Jackson, Amnesty International’s Deputy Regional Director for East Africa.

“It’s been almost a decade since arrest warrants were issued against LRA leaders. The impending transfer of Dominic Ongwen to The Hague to face charges of crimes against humanity and war crimes finally paves the way for survivors of LRA atrocities in northern Uganda to see justice done.”

The Ugandan government referred the situation concerning the conflict with the LRA to the ICC over 11 years ago. The Prosecutor subsequently opened an investigation in northern Uganda and the ICC issued arrest warrants for five alleged LRA leaders in 2005.

On 5 January 2015, the US, working with the African Union (AU) Regional Taskforce in the Central African Republic (CAR), took custody of Dominic Ongwen. On 14 January he was handed over to the Ugandan army contingent of the AU Regional Taskforce.

On 17 January, the ICC took legal custody of Dominic Ongwen in CAR’s capital, Bangui, and he is expected to be transferred to The Hague in the coming days. He faces charges of crimes against humanity and war crimes at the ICC.

Dominic Ongwen was himself abducted by the LRA, reportedly at the age of 10 years old. Abducting, brainwashing and brutally initiating children into killing is central to the LRA’s modus operandi.

“As a victim, as well as a suspected perpetrator, the circumstances of Dominic Ongwen’s participation in crimes committed by the LRA could form part of his defence. In the event of his conviction, his abduction and conscription into the LRA could also be taken into account in sentencing,” said Sarah Jackson.

Now that he has been transferred to ICC custody, the Court must keep victims and affected communities in Uganda informed about any developments in the case against Dominic Ongwen.

“Having recently scaled back its contact with victims in Uganda due to the lack of progress in the cases, the ICC must now re-engage with those most directly concerned with the case through public information and outreach activities,” said Sarah Jackson.

Uganda could later seek to challenge the ICC’s case in order to prosecute him in Uganda. To do so, the government would need to demonstrate to the ICC’s judges that it is genuinely able and willing to investigate and prosecute the case.

The LRA is an armed group led by Joseph Kony. Created around 1987, the LRA initially fought the Ugandan government in northern Uganda. From 2005, Ugandan military operations pushed the group into neighbouring countries.

For more than two decades, Amnesty International has documented crimes committed by the LRA and their horrific impact on the lives of thousands of civilians in the CAR, the Democratic Republic of Congo, South Sudan and Uganda.

It is the responsibility of Uganda to investigate and prosecute crimes committed in northern Uganda by both the Ugandan military and the LRA. An International Crimes Division was set up for this purpose, but its first case against LRA Commander Thomas Kwoyelo was halted after the Constitutional Court ruled that he was eligible for amnesty under Uganda’s Amnesty Act of 2000. This ruling is pending appeal at the Supreme Court.

Dominic Ongwen is charged with three counts of crimes against humanity – murder, enslavement and inhumane acts of inflicting serious bodily injury and suffering – as well as four counts of war crimes – murder, cruel treatment of civilians, intentionally directing an attack against a civilian population, and pillaging.

Arrest warrants against Dominic Ongwen and four other leaders of the LRA for war crimes and crimes against humanity were issued by the ICC in July 2005. One other suspect indicted, Joseph Kony, remains at large while the other suspects are believed to have died.