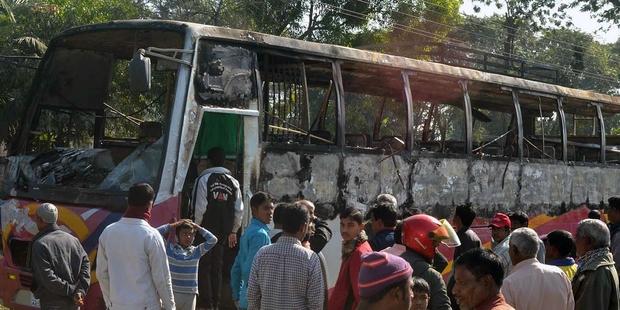 The police operations are in response to arson attacks that have already resulted in more than two dozen deaths.(C) AFP/Getty Images

Media reports yesterday quoted Prime Minister Sheikh Hasina as saying: “as the head of the government I'm giving [the police] the liberty to take any action wherever and whenever it will be deemed necessary” to stop the arson attacks that have already resulted in more than two dozen deaths.

“Remarks like these carry a high risk of being seen as an open invitation for the police to use unnecessary and excessive force against demonstrators or even to carry out extrajudicial executions – which Bangladeshi security forces have carried out with appalling frequency in the past,” said Abbas Faiz, Amnesty International’s Bangladesh Researcher.

More than a dozen people have been killed in recent operations by the police, including the Rapid Action Battalion, an elite special force accused of numerous human rights violations in the past. Ten of the recent deaths occurred in what the police have termed as “shootouts” between 12 and 28 January.

“These deaths during police operations – some of which may amount to extrajudicial executions – must be thoroughly investigated and those responsible brought to justice. The security forces have a duty to maintain law and order, but that does not place them above the law and it is never an excuse to resort to excessive use of force,” said Abbas Faiz.

“Under international law and standards, police may use only what force is strictly necessary and proportionate in a given situation; they must at all times respect the right to life and take steps to minimize the risk of injury and death. Intentional lethal use of firearms is permissible only if strictly unavoidable in order to protect life.”

In recent weeks, the human rights situation in Bangladesh has seen a sharp deterioration as supporters of the government and the opposition have clashed on the streets of Dhaka and other major cities. Thousands of protesters have been arrested.

On 5 January the opposition Bangladesh Nationalist Party (BNP) imposed a transport blockade in the country. Since then, more than two dozen people have been killed and hundreds have been injured, some seriously, when opposition supporters have thrown petrol bombs at buses and vehicles.