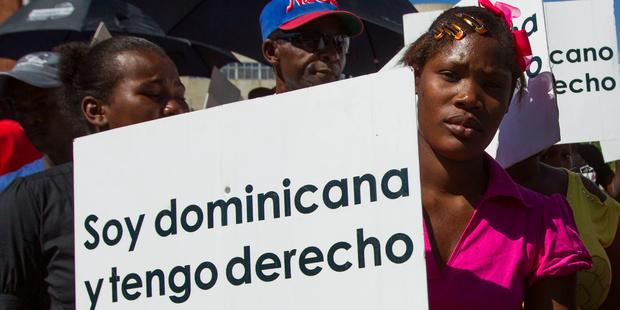 Tens of thousands of individuals born in the Dominican Republic, the vast majority of Haitian descent, are being put at risk of expulsion.(C) ERIKA SANTELICES/AFP/Getty Images

Tens of thousands of individuals born in the Dominican Republic, the vast majority of Haitian descent, will be put at risk of expulsion when the deadline to register for residence expires on 1 February, said Amnesty International today.

Law 169/14, introduced in May 2014, required those born to undocumented foreign parents, whose birth was never declared in the Dominican Republic, to register to a special scheme to obtain a residence permit which would be needed to later claim citizenship in the country. However, the deadline to register will run out on Sunday 1 February and has not been extended. That means all those not already registered in the system will lose the possibility of ever being granted Dominican nationality.

Just a tiny percentage of those eligible to register under the law have been able to start the process before time ran out. The Minister of the Interior said that by 9 January, 5,345 people had applied to the regularization scheme under Law 169/14. This represent less than 5% of the estimated 110,000 people entitled to do so.

The law was introduced after widespread condemnation of the Dominican constitutional court’s decision to retroactively deprive thousands of people of foreign descent of their Dominican nationality, which left them stateless. The new law obliged these people to register themselves as foreigners and re-apply for Dominican citizenship from scratch.

“It is about time to put an end to this crisis. The simple fact is that when the vast majority of these people were born, the Dominican law at the time recognized them as citizens. Stripping them of this right, and then creating impossible administrative hurdles to stay in the country is a violation of their human rights,” said Erika Guevara Rosas.

Expulsions are already being reported. On 27 January, 51 people, including 30 Dominican-born children, some of their mothers and 14 other adults were deported without due process to Haiti from the Dominican Republic.

Law 169/14 creates two categories of people: those who at some point were registered in the Dominican civil registry, and those whose birth was never declared.

Even most of those in the first group, who should have been able to have their Dominican nationality returned in a quick procedure, have been waiting for months and to this day many remain de facto stateless.
Juan Alberto Vill is a young man of Haitian descent born in the Dominican Republic and registered in the Dominican civil registry at the time of his birth. He has been denied his identity documents for many years by the Dominican authorities.

“For too long the Dominican Republic has ridden rough-shod over the rights of Haitian descendants within their country. This injustice has gone on long enough and now the government must take urgent steps to fully restore the Dominican nationality of the thousands vulnerable people that were born, have lived and worked in the country for decades,” said Erika Guevara Rosas.

Hundreds of thousands of descendants of Haitian migrants live in the Dominican Republic. In many cases their relatives had been actively encouraged to come to the Dominican Republic since the 1940s, through bi-lateral agreements between the two countries aiming to relocate a cheap labour force to work in the sugarcane plantations.

For decades the Dominican state formally recognized the children of Haitian migrants born in the country as Dominican citizens, issuing Dominican birth certificates, identity cards and passports to them, irrespective of the migration status of their parents.