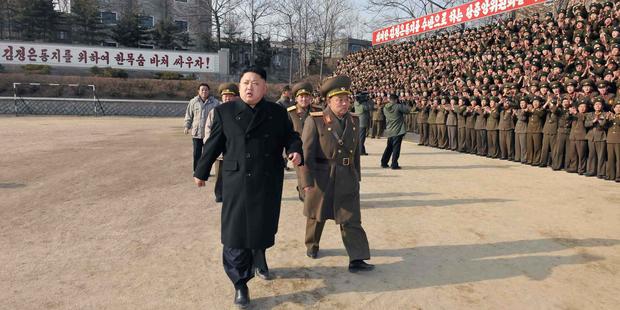 The UN vote has sent a clear message to the North Korean government that those responsible for crimes against humanity must face justice. (C) AFP PHOTO / KCNA VIA KNS

A key UN vote has sent a clear message to the North Korean government that those responsible for crimes against humanity must face justice, Amnesty International said.

On Tuesday, the UN General Assembly Third Committee in New York passed a resolution condemning North Korea for systemic, widespread and gross human rights violations, including crimes against humanity, that continue to be committed in the country.

“UN Member States have today sent an unequivocal message to the North Korean government that those responsible for crimes against humanity in the country must face justice.

“This is a landmark resolution in which the international community makes clear it stands with the victims of human rights violations in North Korea, where the gravity and nature of the abuses are without parallel in the modern world.

“Amnesty International urges the North Korean government to end the systemic human rights violations taking place, and build on its new found engagement with the UN system by allowing independent human rights monitors into the country.”

A UN Human Rights Council-mandated Commission of Inquiry concluded a 400-page report in February, finding that the gravity, scale, and nature of the human rights violations in North Korea are “without parallel in the contemporary world.” The commission documented widespread forced labour, deliberate starvation, executions, torture, rape, and infanticide against the up to 120,000 men, women, and children detained incommunicado in North Korea’s political prison camp system.

The resolution in Third Committee was adopted with 111 votes in favour, 19 votes against, and 55 abstentions. The resolution enjoyed the support by UN Member States from all regions of the world.

The adoption of the resolution was preceded by a vote on an amendment introduced by Cuba, which would have sought to delete key language acknowledging the findings of the Commission of Inquiry and encouraging the Security Council to take appropriate action to ensure accountability, including through consideration of referral of the situation to the International Criminal Court. The amendment was rejected, with 77 states voting against it, 40 in favour and 50 abstaining.

The resolution will be considered by the UN General Assembly Plenary in December.