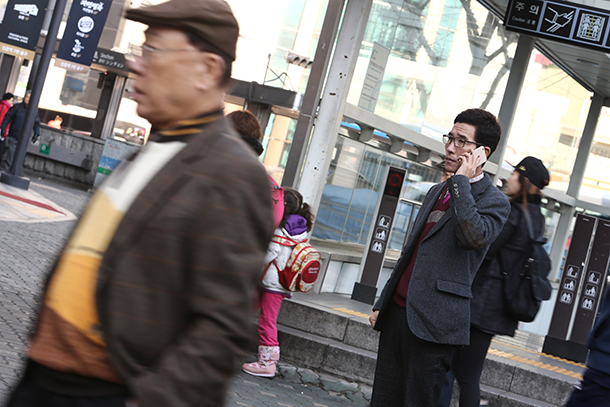 Choi Hyun-joon, a North Korean living in Seoul, Korea, using a phone outside a downtown subway station. He was unable to get in touch with his daughter, Choi Ji-woo, when he fled North Korea, due to the country's restrictions on international phone calls.

Ordinary North Koreans caught using mobile phones to contact loved ones who have fled abroad, risk being sent to political prison camps or other detention facilities as the government tightens its stranglehold on people’s use of communication technology, reveals Amnesty International in a new report published today.

Connection Denied: Restrictions on Mobile Phones and Outside Information in North Korea, documents the intensified controls, repression and intimidation of the population since Kim Jung-un came to power in 2011.

“Kim Jong-un is being deceitful when he justifies such repression as necessary to stop what he calls ‘the virus of capitalism’. Nothing can ever justify people being thrown in detention for trying to fulfil a basic human need – to connect with their family and friends."

The digital frontier is the latest battleground in the North Korean government’s attempts to isolate its citizens, and obscure information about the heinous human rights situation in the country.

International calls are blocked for North Koreans using the country’s popular domestic mobile phone service, which has more than 3 million subscribers. Access to the World Wide Web is restricted to foreigners and a select few citizens. Some North Koreans can access a closed-off computer network, which provides connection only to domestic websites and email.

Most people who flee North Korea have no means to contact their families back home, leaving both sides uncertain about whether their relatives are alive or dead, being investigated by the authorities or imprisoned.

“The absolute control of communications is a key weapon in the authorities’ efforts to conceal details about the dire human rights situation in the country. North Koreans are not only deprived of the chance to learn about the world outside, they are suppressed from telling the world about their almost complete denial of human rights,” said Arnold Fang.

Despite the risks, many people are taking advantage of North Korea’s booming informal private economy, which has seen traders smuggle food, clothing and other goods, especially from neighbouring China. There is a growing illicit trade in imported mobile phones and SIM cards, which are commonly called “Chinese mobile phones”, irrespective of the brand, that enable North Koreans living near the border to access Chinese mobile networks and communicate directly with people outside the country.

Access to Chinese mobile phone networks provides a risky lifeline for people wanting to communicate with family abroad, for those wanting to escape the country and traders wanting to earn a living.

“North Koreans must go to extraordinary lengths, at great personal danger, to have a brief phone conversation with their loved ones. It is outrageous that people could face unfair charges simply for talking with their relatives abroad,” said Arnold Fang.

Speaking on the phone to individuals outside North Korea is not in itself illegal, but private trade of communication devices from other countries is against the law. Individuals who make calls on “Chinese mobile phones” can face criminal charges, including treason if they contact someone in South Korea or other countries labeled as enemies. Lesser charges could include brokerage or illegal trade.

The report shows that Pyongyang has increased its technological capacity to control and repress people in an effort to block contact with the outside world in the digital age. This includes importing modern surveillance and detection devices, and using signal jammers near the Chinese border.

Eun-mi, a woman in her 40s who left North Korea in 2014, was once arrested for using a “Chinese mobile phone”. She told Amnesty International: “Bureau 27 of the State Security Department has this monitoring device, and agents hold this antenna-shaped device in their hands with red lights blinking. They said it was a detection device. When the Bureau 27 agents came to arrest me they took off their coats and there were these electric cords strapped around their body.”

Bak-moon, who was an engineer before he left North Korea, recalled hearing about more advanced, imported monitoring equipment that can recognize the contents of communications. He told Amnesty International: “They can figure out the position of mobile phones precisely.”

In addition to sophisticated modern technology, everyday person-to-person surveillance remains prevalent. Jong-hee, who left North Korea in 2014, said: “Everybody was monitoring everybody else. In neighbourhoods, and in workplaces, people were monitoring each other.”

Anyone caught making an international call using a “Chinese mobile phone” risks being sent to a reform facility, or even a political prison camp. For those without influential government contacts, the only hope to avoid prison is by bribing officials. Interviewees told Amnesty International that seeking bribes now often appears to be the real motive behind some arrests.

So-kyungソキョン, a North Korean woman who now lives in Japan, told Amnesty International of such dangers: “In a bad case we would be sent to the political prison camp, where we would expect a long sentence. A lighter case, we would be sent to a reform facility and imprisonment would be for one to two years. Most people get out with a bribe though.”

In an attempt to avoid detection when making calls abroad, people keep conversations short, use pseudonyms, and go up to remote, mountainous areas. This reduces the chances of calls being jammed and of security agents spotting individuals using the phones.

The most common way for family members abroad to contact loved ones back in North Korea who do not own a “Chinese mobile phone” is to pay someone who owns such a phone —a broker—to set up a call. The broker system grew out of the need of North Koreans who had fled abroad to send money to family members who remained in North Korea, but also serves as a channel of communication, for a fee.

The costs are high. Brokers involved in setting up a call take up to 30% in commission on a minimum USD1000 cash transfer. And because North Korean state security agents try to intercept money being sent home, there is no guarantee the funds will ever reach the intended recipient.

Choi Ji-woo recalled when a broker arrived at her home in North Korea and claimed to have a letter from her father. In the letter, her father asked her to follow the broker’s instructions so they could talk on the phone. Months earlier, state security agents had told Ji-woo that her parents had died trying to leave North Korea. In fact, they had successfully escaped to South Korea but there was no other way to let their daughter know.

Ji-woo undertook a perilous journey with the broker to the mountains, in the desperate hope that she could talk to her parents on the phone: “Sometimes we walked all night to cross a mountain. There was no way around it, and we had to move at night, not during day. We couldn’t use a flashlight, and it was pitch black. I couldn’t see a foot ahead of me. If I could just hear mum and dad’s voice one more time. If I could know with certainty that they were alive, I’d die happy. When the broker made the call and I heard my dad’s voice, I just thought: ‘He’s alive, he’s alive!’”

Family members living abroad can also covertly send Chinese mobile phones and SIM cards to relatives in North Korea, who take a risk in receiving these items. This typically involves paying a bribe to soldiers at the border. With security being tightened at border checkpoints, the cost of these bribes has increased and can now be as much as USD500.

“The North Korean authorities must end the repressive controls against people wanting to contact the outside world. This pervasive violation of the right to freely express and receive information, including across borders, contributes directly to sustaining the horrific deprivation of human rights in the country,” said Arnold Fang.

Amnesty International is calling on the North Korean government to lift all unwarranted restrictions on freedom of expression and allow unhindered flow of information between individuals in North Korea and the rest of the world.

This includes allowing North Koreans full and uncensored access to the World Wide Web and international mobile telephone services. The authorities should further cease any surveillance of and interference with communications that is unnecessary, untargeted, and without a legitimate aim.

In 2014, the United Nations Commission of Inquiry on Human Rights in North Korea found that the gravity, scale and nature of human rights violations in the country do “not have any parallel” in the modern world. This included the almost complete denial of the rights to freedom of opinion, expression, information and association. The findings increased international pressure on North Korea, and the dire human rights situation was subsequently discussed at both the UN General Assembly and the UN Security Council.