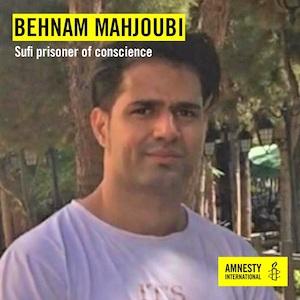 Behnam Mahjoubi, from Iran’s largest Sufi order, the Gonabadi Dervish religious minority, has been held in Evin prison since 20 June 2020. He is a prisoner of conscience jailed solely for the exercise of his rights to freedom of expression, association and peaceful assembly. He suffers from a serious panic disorder for which he needs daily medication prescribed by a doctor outside prison. According to informed sources, his psychiatrist outside prison has assessed him as being unable to withstand imprisonment and doctors from the Legal Medicine Organization, a state forensic institute, have also confirmed in writing after examining him that he is not fit for imprisonment. Despite this, the authorities have refused to release him. Instead, according to informed sources, they have subjected him to torture and other ill-treatment by periodically denying him access to his medication and forcibly taking him to a psychiatric hospital on multiple occasions where he has been injected with chemical substances against his will and without information about what he has been administered. In September 2020, the prison clinic’s doctor pressured him to take sleeping tablets apparently to control his panic disorder, after which he suffered seizures and partial paralysis. Since then, his health has seriously declined. The left side of his body is partially paralysed, his left hand trembles and he is unable to walk without help. He has gone on several hunger strikes in protest at his imprisonment, treatment in detention, denial of access to specialist medical care outside prison for his seizures and paralysis and the periodic withholding of medication.

Behnam Mahjoubi was arrested in April 2018 in connection with peaceful protests that took place in February 2018 by Gonabadi Dervishes in Tehran, which were violently quashed by security forces and resulted in the arrest of hundreds of men and women. Following his arrest by around 20 plain clothes security agents, Behnam Mahjoubi was held for a week in Esfahan and a further 22 days in Kerman. In both detention facilities, he was beaten, held in solitary confinement with lights on for 24 hours a day and interrogated without a lawyer present. His interrogators questioned him about the activities of Gonabadi Dervishes, told him to provide the names of all the Gonabadi Dervishes he knows, and forced him to sign “confessions”. On 9 August 2019, following an unfair trial before Branch 26 of the Revolutionary Court in Tehran, which used his forced “confessions” as admissible evidence, he was convicted of “gathering and colluding to commit crimes against national security” and sentenced to two years in prison and a two-year ban on involvement in social and political groups. He was released on bail on 29 May 2018 and was summoned to begin serving his prison sentence on 20 June 2020.

I urge you to release Behnam Mahjoubi immediately and unconditionally as he is a prisoner of conscience, jailed solely for peacefully exercising his rights. Pending his release, ensure that he is given the specialized medical care he needs, in compliance with medical ethics, including the principles of confidentiality, autonomy and informed consent, and that he is protected from further torture and other ill-treatment. Please ensure that he has access to his family and lawyer of his choosing.